the open source, free file copy utility that is: 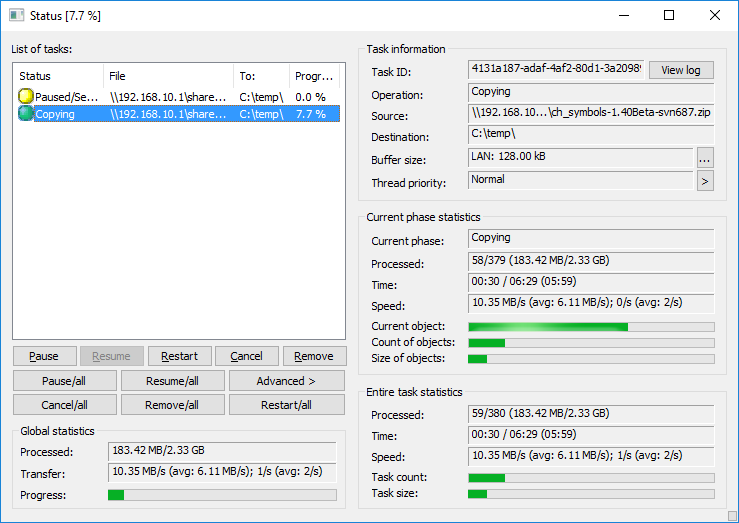 Yesterday evening I have released version 1.46 of Copy Handler that fixes 2 bugs related to explorer integration.

At the same time the first beta of CH 1.50 was uploaded that drops support for Windows XP and Vista, adds better handling of unattended operations, changes status dialogs (big and small) and features many other changes. Feel free to comment on the new version in our forum thread: https://forum.copyhandler.com/general-support-(english-only)/copy-handler-1-50-feedback/

After fixing a few bugs found in 1.45rc1, I'm releasing final version of Copy Handler 1.45. So far only sourceforge mirror has been updated properly; fosshub is in the process of publishing it. Tomorrow I'll update download section of this page and update-check information.

CH 1.45 is one of the last versions of Copy Handler that supports Windows XP and Windows Vista. Next version (1.50) will support Windows 7 and newer systems.

As all of you have noticed, Copy Handler was completely inactive for the last few years due to me being occupied with family matters and some other projects.
Just last week I have managed to find some time to spend on this project, but it's hard to say how long it will last - probably no longer than Q2 2021 when my family is expected to grow again.

Last week I've released first release candidate of CH 1.45 that contained mostly fixes that accumulated over last few years. I want to release final version of 1.45 this year - hopefully after hearing your feedback.

This release (and eventually bugfix releases from the 1.4x series of releases) will be the last ones to support Windows XP and Windows Vista. In the future they will only receive bugfixes that are either critical or does not require rewriting large amount of code.

Supporting those systems in 2020 involves a lot of extra time better spend somewhere else.

The next version planned is 1.50 - it will support Windows 7 and later.

One of the user-facing changes that were also committed is removal of html help system. It was not maintained for years due to always not having time to do that. There were no complaints so it's quite possible it was not being used at all.

There are only a few small features I'd like to implement before releasing it for testing - I'm hoping for this year's release too.

Today the "Contact Us" functionality on this website had been fixed - it was not sending e-mails for prolonged period of time (thanks to user bawldiggle from our forums who reported this problem).

Today, the first release candidate of Copy Handler 1.45 is being released. It contains fixes for several bugs found since 1.45beta1.